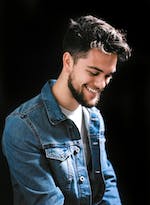 A guitar, a bottle of bourbon and a copy of “The Chronicles of Narnia” were all singer-songwriter and UNC 2013 alumnus Charlie King needed on his getaway to write his sophomore album, “Path of the Moon.”

King didn’t grow up in a musical family — he fell into his passion.

“I just kind of inexplicably fell in love with music at some point,” he said.

King's musical career began in the eighth grade when he and some friends formed their own indie band. He learned his passion for playing guitar and discovered his love for writing songs.

Column: How tech can learn from the pandemic

He entered UNC as a communications major, hoping to eventually get a job working as a music producer.

“It’s been my dream for a long time to pursue music as a writer and performer, but I think coming into college I just thought, ‘Well, you know, that’s far-fetched,'” King said. “That was me trying to run away from a dream that I had.”

He soon switched to double major in music and religious studies and began to focus on his music career. While at UNC, King was part of Psalm 100, a Christian a capella group, and was heavily involved in Cornerstone, now known as Campus Crusade for Christ International, or “Cru.”

Tyler Carson, a UNC junior at and King's friend from high school, remembers him leading worship and music at Cru.

“He’s just a really standup person, someone who really cares about other people and just wants to make everybody feel cared for," Carson said. "I know that he definitely went out of his way to do that for me."

After graduating and getting married, King moved back home to Charlotte to work on his musical career. In October of 2013, he turned some solo acoustic songs from a summer project the year before into his first EP album, “I Am Here.”

While in Charlotte, King reached out to singer-songwriter Reeve Coobs, who helped him enter the Charlotte music scene. They began playing music together and she eventually became the female vocalist for “Path of the Moon,” which was written on a weekend getaway trip to Morehead City in February 2014. King wrote four songs, including the title track while in total solitude at the Outer Banks.

“There’s just a beauty and a relaxation quality to the music, but also at times it’s pretty upbeat and happy," Coobs said. "It’s kind of like the ocean’s waves going up and down.”

After completing the album, King reached out to artists and formed a six-piece band. Together, they recorded the entire album in two days. Unlike regular music recordings, the entire band recorded it in a studio at the same time.

“It was new for me — it’s a live record basically,” Coobs said. “We weren’t going for perfection, we were going for performance.”

King’s performance Thursday will be his second time playing in Chapel Hill, and his first time playing full band.

“For me, these songs were songs of escape. A lot of songs that came to me at a time of just being pretty tired of the routine that I had fallen into,” King said.

“My hope is pretty simple for people — I hope that they enjoy it.”

Next up in Music