BY From staff and wire reports 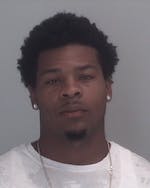 Update, Aug. 7: Malik Simmons has been suspended from the first two games of the 2015 football season, according to a news release from the University.

Simmons will continue practicing with the team and will play in the game against Illinois on Sept. 19.

"Malik's actions did not meet the standards of the Carolina football program and he will serve a significant penalty as a result," head coach Larry Fedora said in the release. "I'm confident he will learn from it and we can put these issues in the past."

The Associated Press reports that Simmons must complete the community service by Feb. 4 and write an apology to the arresting officer.

Simmons did not participate in team practice on Thursday.

UPDATE, Aug. 3: After UNC's first training camp practice today, head coach Larry Fedora said Malik Simmons had been reinstated to the football team for practice. Unlike earlier this preseason, the senior cornerback spent the majority of the day working with the Tar Heels' second-team defense.

"We're gonna wait and see this thing play out and there will be obviously consequences in the future," Fedora said. "I'll make a decision on what is going to happen from there."

Despite the added buzz of Simmons' arrest hovering over the practice field Monday, senior quarterback Marquise Williams said the situation would not affect the team's chemistry.

"A lot of people make mistakes, and we give everybody second chances. We can't dwell on it," he said. "A guy like me, I'm gonna keep him positive. I'm gonna tell him, 'Hey, everybody makes mistakes. Just get on the field, and when you get on the field you play your balls off.'"

There's too much negativity going around this campus, and once you stay positive, we don't bring the negativity. We ready to ball out," he said.

July 24: Senior football player Malik Simmons was arrested and charged early Wednesday morning with resisting arrest, according to Chapel Hill Police, for his second run-in with the law this summer.

Simmons had been cited in May for possession of marijuana up to half an ounce, court records show.

Both charges are misdemeanors.

Simmons, a cornerback from Florida who started five games last year at the now-eliminated Ram position, has been suspended indefinitely from all team activities, according to UNC athletic department spokesman Kevin Best.

The most recent police report says Simmons' bond was set at $1,000, and he was not listed in Orange County jail records as of Friday afternoon. He is set to appear in court on July 28 for the resisting arrest charge and August 3 for the marijuana possession charge.

Next up in Crime and public safety

Next up in Public Safety