If you’ve ever been in Lenoir Hall you’ve definitely noticed a few things — yes, the cookies are delicious. Yes, the Chick-fil-A line will be eight miles long between classes every morning. And no, they won’t give you a biscuit at 10:31 a.m., even if you’ve been waiting in line since 7:30 a.m.

But there’s one thing that everyone can relate to, even if you only notice it subconsciously.

It may not be obvious at first, but once you notice it, you’re stuck with it for life.

The dining hall is always bumping straight fire on the AUX. It’s like DJ Khaled and Beethoven are taking turns hooking up their iPhones all day long.

Whether you’re in the bottom of Lenoir cramming for your 9:30 am. econ midterm or kicking back up top after a long day of class, the music somehow always fits your mood perfectly.

In order to solve the mystery of the dining hall’s perfect playlists, I took the only approach I could think of — I slid into Carolina Dining Services' DMs. 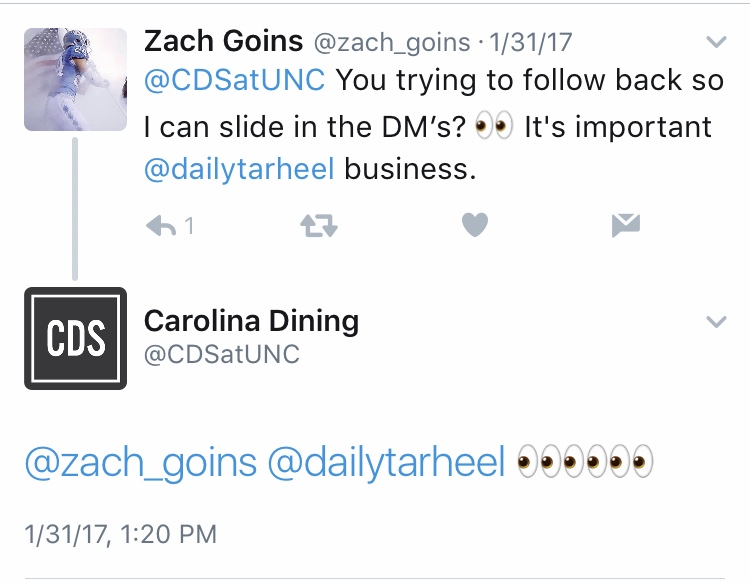 After the slide, I was able to set up an interview with Scott Myers, the interim director of Auxiliary Services, aka AUX Master General.

The Daily Tar Heel: How do you go about picking music?

Scott Myers: So, it’s probably not gonna be as glamorous as you were thinking, you know? Some places have systems where you hook up your MP3 player, and employees pick out the list and things — we don’t do that. We actually use a service called Mood that basically gives you genres of music with combinations of them, so you have a bunch to pick through. So our marketing department basically takes student input, and then recommendations from Mood, and figures out what stations to choose at different times of the day.

DTH: Are there certain playlists for certain times of day?

SM: I guess in the morning, we find that people are a little grumpier and don’t want to be rocked, so you probably hear more classical music in the morning while people are getting themselves ready for the day and maybe studying or talking to folks. And then you’ll find more pop and current music during lunch and dinner times.

DTH: So is it considered a playlist?

SM: Well, it’s a playlist that’s managed by Mood. Now, what we do is that our marketing folks actually take note of what stations actually play the songs that people are requesting. So if we get student requests in, they know sometimes which stations to kind of go to.

DTH: So how often do the playlists rotate? Is it a new playlist on a daily basis?

SM: Not all the time. Intermittently, we’ll change things up. You know, we don’t want to knee jerk everything. And we give our marketing folks some leeway to kind of try new stuff based on student requests.

DTH: So, you match the music with the time of day — have you ever tried to match with the weather? Does a gloomy, depressing, rainy day affect what kind of music is played?

SM: Well, they certainly have the leeway to do that, but I can’t pick out a time when we’ve actually done that. That’s interesting. We’ve gotta try that.

DTH: Is there a seasonal match? I know the holiday season always has some great music.

SM: You’ll get some different holiday music stations that you can choose from, so around Thanksgiving and Christmas time you’ll hear a lot of that.

DTH: So do you ever try and mix in any Drake or Taylor Swift to keep people on their toes?

SM: I’m looking at some of the songs now in preparation for your meeting. We don’t actually get a list of songs, but we can see what’s currently playing and they can go back and look at the last five songs. So, at the time I checked yesterday, here were the songs that were being played — and you’ve got to forgive me because there are some current ones that I don’t know. “Rattlesnake Highway” by Palma Violets? Does that ring a bell? “Lips Are Movin” by Meghan Trainor? I’ve heard of Meghan Trainor. “Send My Love” by Adele, so that’s popular. “Hands to Myself” by Selena Gomez, and “Clarinet Sonata in E Flat Major.”

DTH: One of those does not fit with the others. That must have been the shift from morning to afternoon there.

SM: I’ve got to admit that I had to be convinced that this was the right thing to do when we put music in, because I can remember times in the past where people just argued over what music to play and some people didn’t want to hear anything, so I knew it was somewhat of a risky venture, but honestly I guess, new culture, new times, because we’ve gotten nothing but positive feedback on music.

DTH: It’s always nice if you’re sitting up there with someone new and there’s a lull in the conversation — you’re not left with an awkward silence.

SM: Well, we try to be mindful of the volume levels so that we don’t drown out conversation. If you’ve noticed there are areas of the dining hall where it’s louder than other areas, so we know that the people that want to hear the music will tend to kind of shift to those areas.

DTH: So where are these top-secret areas?

SM: It’s around where the speakers are, so if you go to the Top of Lenoir and you go to different sides it’s pretty noticeable there. In the middle it’s not as loud, but also the sound can carry down that opening between the Top of Lenoir and the lower floor. On the lower floor it sounds a little bit louder right there along the entranceway. But then when you get hundreds of people in here that tends to lessen the volume too.

DTH: Do you have a favorite song you like to put in the rotation?

SM: No, because I’m more of a 70s music kind of guy. Folk music, not quite the same era of music. Every once in awhile I hear one of my songs come on.

DTH: Is there a most requested song among students?