Heather O'Reilly during the 2006 College Cup.

CORRECTION: A previous version of this story incorrectly stated that O'Reilly was the first female staffer under head coach Anson Dorrance. The article has been updated to reflect the change. The Daily Tar Heel apologizes for the error.

Heather O'Reilly couldn't sit still. She arrived nearly thirty minutes late to her interview at Carolina Coffee Shop. She wasn't nervous — after all, she owns the restaurant (along with several others, including her husband). But as she talks, her eyes dart around, constantly looking, while her hands absent-mindedly unwrap and arrange a bundle of silverware she will not use.

By all accounts, O'Reilly hasn't sat still much in her life. Not when she came to UNC as a first-year soccer player in 2003, and not now, 16 years later, as the program's newest volunteer assistant coach. The first thing anyone mentions about her is how much energy she has.

O'Reilly, tied for the eleventh most goals in USWNT history, split her time this season between Chapel Hill and Raleigh, where until very recently she was finishing the last year of her playing career with the NC Courage.

She rejoined the program in the wake of longtime assistant coach Bill Palladino's retirement, and her career has now come full circle. Despite playing for numerous professional teams all over the country, along with a stint in England, O'Reilly never really left Chapel Hill after graduating in 2006. Now, she'll lend the Tar Heels her experience as the team prepares to enter the postseason and try to claim its 23rd national championship.

"She is tightly bound to this program," said Dave Lohse, associate director of women's soccer and men's lacrosse at UNC. "She was before she came here, she was when she was here, she will be forever."

Getting back to Chapel Hill was always the plan for O'Reilly and her husband, Dave Werry. The two met at UNC, when O'Reilly was in the midst of her hall of fame collegiate career and Werry was on the men's lacrosse team and a Morehead-Cain scholar.

"We lived elsewhere in our twenties after college. New York, Boston, different cities," O'Reilly said. "But we always sort of knew that Chapel Hill was our long-term goal to get back to. A few years ago we actually bought our first house here in Chapel Hill, and since I was still playing, I was living a bit of a transient life."

That life took O'Reilly overseas, where she got to fulfill one of her lifelong dreams of playing in Europe. She signed with Arsenal Women's Football Club in 2017, a club that plays in the Women's Super League in England.

"I told her it was important to immerse herself in a culture that loved everything about (soccer) so she could get a real sense of how important it is to watch the game at the highest level," UNC women's soccer head coach Anson Dorrance said. "I wanted her to immerse herself in the English soccer culture because I thought it would be really good for her as a human being, but also as a women's soccer player."

It was at Arsenal that she first met a not-yet committed Lotte Wubben-Moy, now a starting defender for the Tar Heels. One of two British players on UNC, Wubben-Moy knew from the jump that O'Reilly was a different kind of player than she was used to.

In European women's soccer, there are no Brandi Chastains taking their shirt off to celebrate victories. The sports culture isn't the same — celebrations are kept off the field, upper lips are kept stiff, and decorum is kept at the forefront. That wasn't O'Reilly.

"Americans are very outgoing, they're super loud, super fun, they're not really afraid to talk," Wubben-Moy said. "And that was Heather, she wasn't really afraid … that was the biggest thing, that you could hear her."

O'Reilly has always been loud — it was one of her defining traits during her time at UNC.

"She had an enormous competitive fire, I'm not sure everybody has that," Lohse said. "Hers was also that she was emotive as well. She wasn't that steely sort of competitive fire. It was emotional, it was demonstrative and it was unique."

Carolina on her mind

In 2016, O'Reilly announced her retirement from international play with the U.S. Women's National Team. She assumed the final chapter of her career would be in England. When her tenure was coming to an end, though, something didn't feel right.

"It was just a matter of if I wanted to end my career in the U.S.," O'Reilly said. "It became more and more clear that one, I still wanted to play, two, I wanted to play in North Carolina."

O'Reilly and the NC Courage organized a trade to make her wish come true. She finally joined the NC Courage midway through the 2018 season, winning two championships along the way.

"I was joking that I feel like some kind of fruit, like an orange that's had literally every drop squeezed out, from a physical level, mental, emotional," she said. "I have a little bit of juice left, but I'm okay with that. I think that little bit left is really important to my life going forward and the way I want to contribute to the sport."

O'Reilly didn't have to wait long to find out exactly how she'd stay involved with the sport. Over the summer, Palladino announced his retirement from UNC. He had been with the program, and Dorrance, since 1980.

O'Reilly called Dorrance as soon as she heard the news, asking if he would have a spot open for her to join his bench. Cut to a few months later, and she's already won over the locker room at UNC.

"Heather as a person is a ball of fun, so to see her in a coaching environment and apply that happy-go-lucky feeling to coaching is pretty amazing," Wubben-Moy said. "She gets the right balance of it."

Fresh off the pitch, O'Reilly brings youth and a fellowship with the young women of the team that Dorrance can't.

"She's a mentor, she knows what we've been through," Wubben-Moy said. "That's probably the most special thing you can have in a coach, someone who gets you and understands you. Besides, Anson is what, 83?" (He's 68).

There's something to be said for having a coach that's "fresh off the field," as O'Reilly puts it. She has, quite literally, been through it all before.

"I know how the players will feel, I know how they feel physically on the actual field,” she said. “I feel like I can kind of demonstrate things and if they need help working on anything I can be there as a support."

Right before a game starts, there is an order to things. Dorrance speaks with the players, assistant coach Damon Nahas says his word – then, O'Reilly's is the last voice the players hear before they take the field. Wubben-Moy says it's a sign of respect from Dorrance to his former player.

Now that O'Reilly's playing career is done, the focus will be on the Tar Heels' postseason — a place the new coach is very familiar with. She won two national championships during her time as a player - in 2003 and 2006 - and was named offensive MVP of the College Cup both times.

The current UNC team will try to make it back to the College Cup for the second year in a row. Last year ended in disappointment after a deflected ball was scored by Florida State - a 1-0 NCAA title game loss. This time, though, the Tar Heels will have one of the most decorated players in school history to help them get back there.

And after the season's over, what lies in store for O'Reilly? She's not sure. She and her husband bought a puppy — training wheels for a future kid — and she'll continue her coaching career, wherever that takes her. She's planning to stick around in Chapel Hill for a while.

After all, she only just got home. 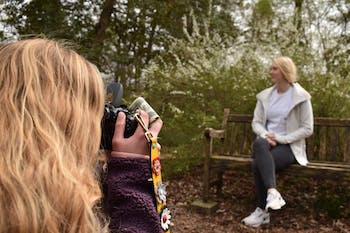 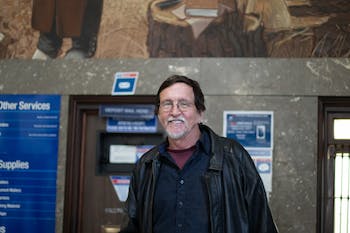 Not a muralist: Just Michael Brown

Next up in Women's soccer