'Put actions behind your words': Being a Black student-athlete at UNC 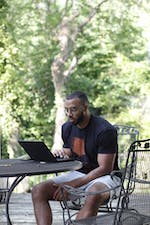 Jake Lawler sitting down to write.

Though the world of sports has been put on hold due to the spread of COVID-19, athletes at UNC are speaking out as protests against racial injustice sweep the country.

Sports fans have already seen athletes such as Stephen Jackson, Malcolm Brogdon, Von Miller and Jaylen Brown attend protests against systemic racism and police brutality. Many other athletes have been using their platforms to address racial injustices that have continued to occur throughout the 400-year history of the United States.

From Tommie Smith and John Carlos raising Black Power fists in the 1968 Olympics, to Craig Hodges wearing a dashiki at a White House visit, to Colin Kaepernick kneeling during the national anthem, social activism has been a continually present part of the sports world among athletes. Despite this history, such athletes have often been more criticized than they’ve been praised.

Many of UNC's marquee athletes — such as Michael Jordan, Julius Peppers, Vince Carter — are Black and have garnered much attention for their respective programs before going on to successful professional careers.

Currently, Black athletes continue to represent the school in their fields of play while offering insight on the racial injustice happening across the United States. Daily Tar Heel sportswriter Jeremiah Holloway spoke with two of them:Jake Lawler, who completed his tenure on the football team after the 2019 season, and Hannah George, who currently pitches for the softball team. Both spoke about their experiences at UNC as Black student-athletes and their perspective on the protests that have erupted across the country.

Lawler, who helped co-found the UNCUT video platform for student-athletes, spoke to his growth with being aware of and speaking out on racial topics.

“(Chapel Hill) is liberal and it is progressive, but everywhere you’re going to have people who don’t understand or don’t care. I think being surrounded by so many white people who were apathetic or ignorant just pushed me to go and delve into our own history and culture so I could be a voice for the voiceless.”

George, who has been at UNC for two years, discussed her personal experiences with discussing race and culture on campus based on the questions people have for her.

“It might be about my hair one day,” George said. “‘How do you get your hair like that? Why don’t you straighten it?’ It's mainly asking questions in a polite way.”

“There have been a couple of instances when I had to put people in their place with microaggressions, which I take as a learning opportunity. We’re in a new space and I’m glad I can teach them and address it with them.”

Lawler spoke highly of the acceptance the football staff has shown to all of its players and the job they have done providing space for the athletes to be themselves.

“The staff is willing and able to talk about these issues because they care about them,” he said. “I think they care about us as men and they’re not one of those staffs that says, ‘I don’t see color,’ which is the dumbest thing ever. They understand Black people have been persecuted in this country just because of how they look.”

George talked about the need for transparency and vulnerability on sports teams and why teams need to embrace each other for who they are.

“Anything that deals with racism or injustice or making a person uncomfortable because of their own skin should be discussed in sports,” she said. “Teams are like families, and many sports teams have different skin colors. Different upbringings, different beliefs.”

“Through that,” she added, “we learn how to love each other despite our differences.”

Atlanta has notably had multiple protests that have resulted in arrests and garnered national attention. George, a resident of Georgia, said she can empathize with the protesters in her home state.

“They are hurt, they are angry, they are frustrated,” she said. “They are at the end of the rope and I feel the same way.”

“In softball, and most likely baseball, you see someone throwing a helmet because they struck out. Or in tennis, someone throwing a tennis racket because of a bad call by the referee." George continued. "In those riots, they want change and they feel like they’re not being heard.”

She cited a Martin Luther King Jr. quote: “A riot is the language of the unheard.”

Both Lawler and George discussed the role that sports media plays in handling these topics, why they see it as important to address them and how they look to keep the conversations about racism and police brutality relevant.

“People in the sports world need to know what’s going on to support their Black teammates, friends, coaches, managers in the best way possible,” George said. “Some of our allies don’t know our experiences. But that shouldn’t affect how they support. They should want to be able to learn and hear people out so they know what they can do to support them in this time of need.”

With the current state of the country, Lawler believes that it is vital for UNC to step up and face issues of racism. While he commended Mack Brown and the rest of his football staff, he believes the University as a whole needs to do a better job.

“While I’m thankful for my time and thankful for my experience, we can’t just do the same old runaround,” he said. “This is a University that sanctioned a Confederate statue.”

Next up in Softball