As per usual, the world of politics has provided us with everything needed for an action-packed soap opera: fights, accusations, he-said/she-said, deactivation of social media and much more. Seriously, has anyone looked into a political soap opera? Keeping up with the Kandidates, anyone?

Hillary Clinton: RIP, Hillary’s MySpace page. It’s true, the former Secretary of State’s MySpace page is now restricted, though it was active as early as this year. :( The campaign hasn’t responded to questions about making the profile private, but if you’re feeling really nostalgic, here’s a screenshot of her page after she announced her candidacy in 2007: 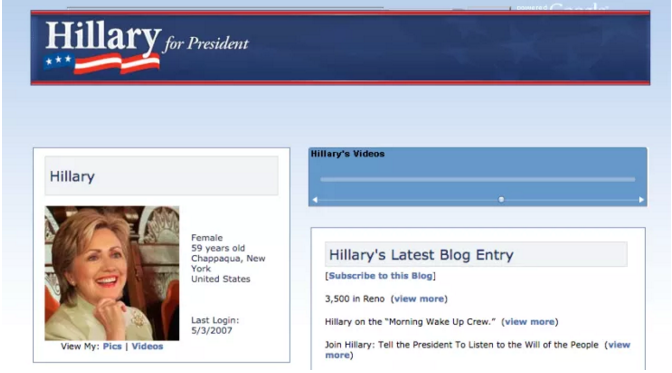 Bernie Sanders: Some of Bernie’s supporters might not be “feeling the Bern” when it comes to his views on climate change. Even after the terrorist attacks in Paris, Sanders said in Saturday’s Democratic debate that climate change is still the greatest threat the the U.S. faces. He has gone so far as to say that climate change is directly related to the growth of terrorism. Some hope that he will change his tune.

Donald Trump: On Monday, Trump told thousands of supporters in Knoxville, Tennessee, he predicted terrorism because he can “feel it.” Local Spider-Man experts say this is the first time any candidate has used “Spidey senses” on the campaign trail.

Ted Cruz: Sen. Cruz is lol’ing at fellow senator Marco Rubio, and not because they’re apparently friends irl. Rubio said Cruz was also a supporter of legalizing immigrants who are in the country illegally, citing a 2013 amendment Cruz introduced that would have increased the number of visas for highly skilled workers. Cruz set Rubio straight in a statement Friday, saying the accusation is “laughingly, blazingly, on its face false.”

Mike Huckabee: In a Monday interview with Breitbart News radio, Arkansas Gov. Huckabee said it “simply does not [make sense]” to accept Syrian refugees from a desert region and put them in Minnesota, where they wouldn’t speak English and they would be cold.

Marco Rubio: Politics truly is a family affair. Since Rubio’s dust-up with Sen. Rand Paul in the last GOP debate, Paul’s dad Ron has decided to get in on the action. While lauding Rubio for the jobs his spending plans would create, Papa Paul said he would like to send politicians with plans like Rubio’s to outer space, where he thinks they belong.

Rand Paul: Don’t put words in his mouth, Rand! In a speech in New Hampshire Friday, Sen. Paul attributed a quote to Founding Father Patrick Henry. The quote he cited talked about the Constitution and that its original intention was to restrain the government, not the people. However, Thomas Kidd, a Patrick Henry expert, said in his book "Patrick Henry: First Among Patriots," that while this sounds like something Henry might have said, it’s been fabricated quite recently. #oops

Chris Christie, Jeb Bush, John Kasich: Still running for president, but the jury’s still out as far as their relevance.

Quote of the Week:

“Nobody has been able to sit down with him and have him get one iota of intelligent information about the Middle East.”