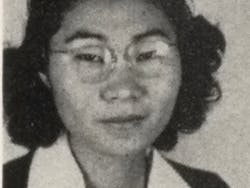 Haruko (Francia) Chisaki Hommersand, 96, passed away at her home on May 17, 2022. Her husband Max Hommersand and their son Eric were at her side.

Fran was born of first-generation immigrant parents and grew up in California's Imperial Valley along with her five siblings. In 1942, because of their Japanese heritage, they were all uprooted and interned at Poston Camp I in the Arizona Desert. While interned at the relocation camp, as a teenager, Fran served as a nurse for the elderly. After her graduation from the Poston high school, Fran was invited to attend Earlham College, a Quaker college in Indiana, and was thus permitted to leave the camp early. After the war the family returned to California and Fran completed her B.A. and M.A. degrees in Botany at the University of California, Berkeley.

Fran and Max met in Berkeley in the summer of 1960. Max had completed his Ph.D. in Botany at UC Berkeley, and that summer returned there after his first year teaching in the University of North Carolina's Botany Department. At that time Fran was working in UC Berkeley's Herbarium. In August of 1960 Fran and Max were married and moved to Chapel Hill, which became their home for 61 years.

Although, due to nepotism laws, Fran could not have a job at UNC, she helped Max with his growing collection of algae and many requests for cuttings from specimens in his collection. Fran and Eric accompanied Max on collecting trips to both North American coasts, to Izu, Japan, for six months, and to New Zealand for a year. Max and Fran also spent half a year at Rhodes College in South Africa working with colleagues, and later traveled to Madagascar to study the flora and fauna there. While in Europe, they worked for a summer in Northern Ireland and spent time in Italy and other coastal countries. One of the last of their many trips was to work with a colleague on the Kamchatka peninsula in the far east of Russia.

Fran was an avid birder and joined in the annual Audubon count as well as keeping a tally of her own sightings at home and abroad. While on a boat ride off Kamchatka she was thrilled to see one of the world's largest and rarest eagles, a Steller's sea eagle. She hiked and searched for plants wherever she was, and loved the Chapel Hill botanical garden. The Phycodrys franiae was named in her honor. Opera was another great love as was reading, and she enjoyed meeting a group of friends for coffee to talk about and exchange books.

In addition to Max and Eric, Fran is survived by her sisters Kaz and Hide and her brothers Jim and Roy all of California, her sister-in-law Helen Hommersand Hopper and brother-in-law Paul Hopper of Pittsburgh PA, and many nephews and nieces. Fran's older brother Jake died a few years earlier.

Condolences may be shared online at www.CremationSocietyNC.com

In lieu of flowers memorial contributions may be made to the UNC botanical gardens and Herbarium. https://ncbg.unc.edu/support/donate