Maggie Boulton said finding a seat on the first day of ECON 101 caused more stress than the class itself.

“It’s nothing that I’m really used to. In high school, we didn’t have classes packed with 400 kids,” said Boulton, a freshman.

“I felt like I was sitting down to watch a show or an exhibition of some kind. The whole atmosphere blows you away — the room is packed,” she said.

But economics professor and department chair Patrick Conway said crowded courses are becoming the norm at UNC, as more students are attempting to enroll in already popular courses.

“There is excess demand for the course,” Conway said, in reference to the introductory economics course. 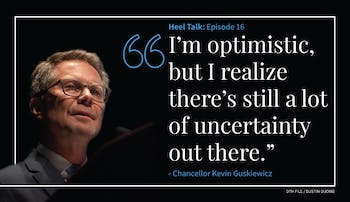 “We have a full course of 400, and we’ve got about 30 people sitting on the floor in the back. An awful lot of people want to get in.”

Boulton said she’s lucky she got into the course early.

“It seems like a lot of people didn’t get in by the first day, because there were so many kids sitting in the back on the floor or in the aisles,” she said.

She added that she doesn’t think the overcrowded course won’t affect her comprehension of the course material, but she can see how easily distracted students might struggle to pay attention.

Conway said interest is growing in already large courses in his department due to higher interest in majors that require ECON 101 as a prerequisite.

He said in the last five years, the number of economics majors alone has grown from 400 to more than 1,000.

“We know it’s a problem in this course because a lot of students want to take it, and due to the budget cuts we are glad if we can keep the same number of seats available every semester,” Hannig said.

Conway said overcrowded classes might pose a threat to graduation rates, as many majors require the completion of introductory level courses before advancing into higher level courses.

“If you can’t get into ECON 101, you can’t even start that process,” Conway said.

“It pushes you up to your deadline at Carolina if you can’t get into ECON 101 early.”

Biology professor Kelly Hogan said she overenrolls courses on purpose with the expectation that some students will drop within the first few weeks.

Hogan said deciding how many students to overenroll is “a delicate balance.”

She added that the over-enrollment process operates independently from academic advising. It is the departments’ discretion to decide how many students to over-enroll for each course.

Economics professor Boone Turchi said teaching a large course can be off-putting for professors, as it requires a creative approach to leading a class.

“I avoided teaching (ECON 101) for 20 years and finally got nailed,” Turchi said.

“The idea of professors droning on in front of a large number of students didn’t really appeal to me.”

But he said the only solutions to overcrowded courses are offering more sections or additional large lecture halls, both of which are impossible.

“As far as restructuring, given the budgetary situation, there’s no way in the world we could do that — we couldn’t even think of that,” Turchi said.