Comedian Josh Gondelman is a writer for HBO's "Last Week Tonight with John Oliver," and currently touring the U.S. on his "Sweater Weather" tour. Audio director Alice Wilder caught up with him during his Chapel Hill tour stop on Friday.

The Daily Tar Heel: You do these wonderful pep talks on Twitter, how did that get started?

Josh Gondelman: The pep talks? So it started — I think it started on the road and it was just like a late night, I was in a hotel in some city. It felt pretty anonymous and I felt a little disconnected from everything. My fiancé, girlfriend at the time, was asleep and it wasn't like I could be like "Hey, I love you." I mean, I could, I probably did, and I thought, instead of like, reaching out in a needy way, I thought "Maybe I can do something nice for someone else and that'll make me feel connected," and so that's kind of the genesis of it. It's the kind of thing where I … I like connecting and so it felt nice to me to do something nice for someone else when I could.

DTH: Has anything ever developed out of that?

JG: I've had a couple people write to me and be like, "Hey, I don't know if you even remember this but you gave me a pep talk eight months ago when I was about to go in for a job interview, and it went really well and I really appreciate you taking the time." 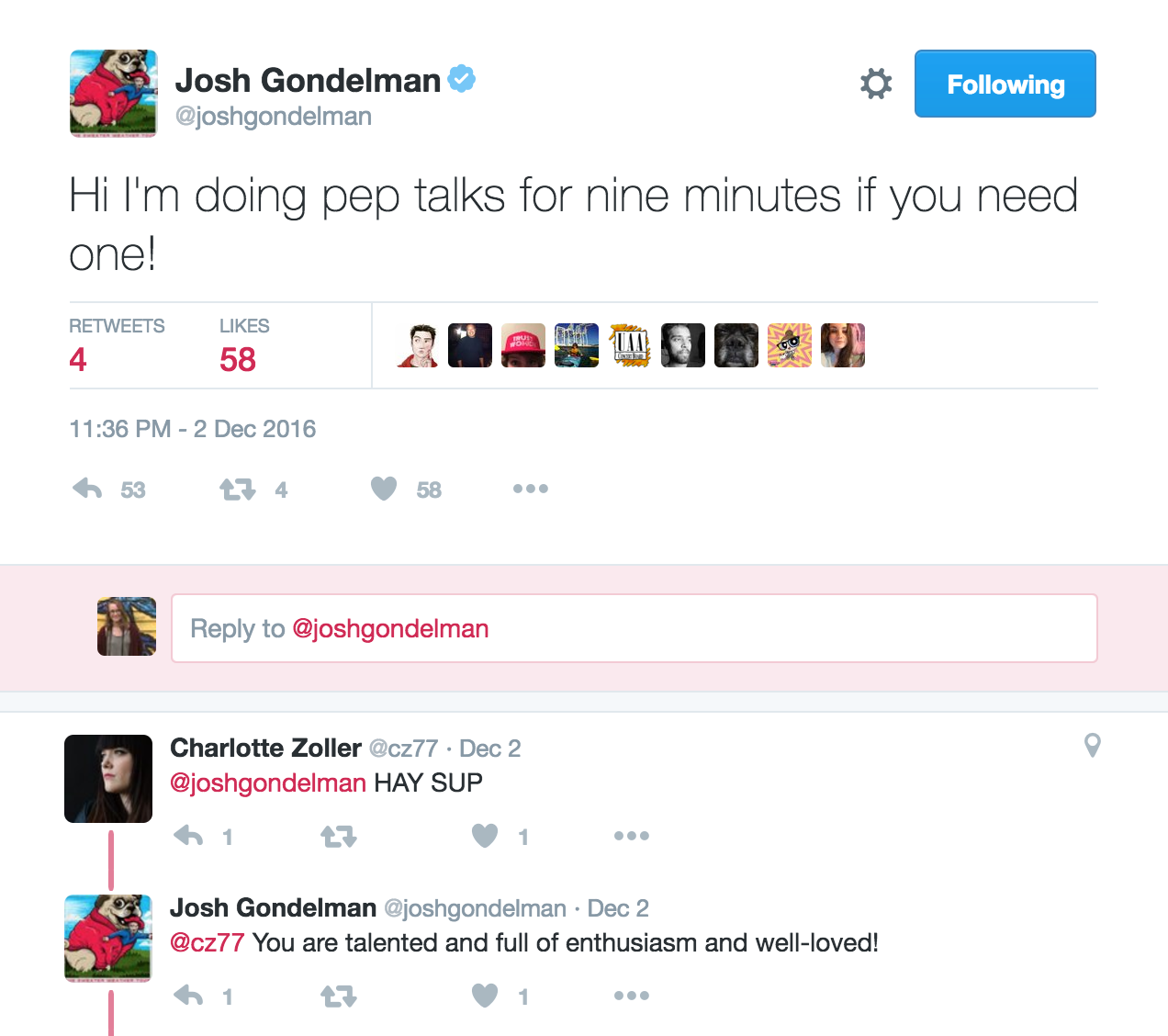 DTH: For the readers who are going through exams, do you have a pep talk?

JG: My general feeling toward big projects is, you've done things like this before, you're going to do this one and then you'll be done with it, and then it's over. And that's like, the best feeling, it being over. I guess there are people whose first semester it is, in which case, you'll get through it for the first time and then you'll do it again. But for everyone else it's like, you did it last semester and you did it the semester before, it's going to stink, you can do it, you're capable of it, you've demonstrated that and then you've conquered it, and that's a big deal and you deserve to feel good about it.

DTH: You wrote about it being OK to be "thirsty." Can you say more about that?

JG: I really think the best things happen when you say what you want and then listen to the answer. So like, it's okay to be up front and it's okay to be rejected. I think that's something that took me a while to learn. Sometimes things are hard and weird, or sometimes people are intimidating, or situations are intimidating, but I found the relationship I'm currently in, which I intend to stay in, it always felt really natural and we both reflected that behavior in one another like, "Let's hang out, I like to hang out with you, it is fun, I had fun, let's see each other again soon." I think maybe this is an easier thing for guys to do because some guys are socialized to take when a woman is forward, to not appreciate that, but personally I think upfrontness is so appreciated and so like, not overbearing and, taking no for an answer certainly is important if the answer is no, but I think it's so refreshing when someone is like, "Hey I really like you."

DTH: In your poster for your tour, you're inside of your dog's sweater. Tell me about your dog — that's a pretty big dedication to give to an animal. 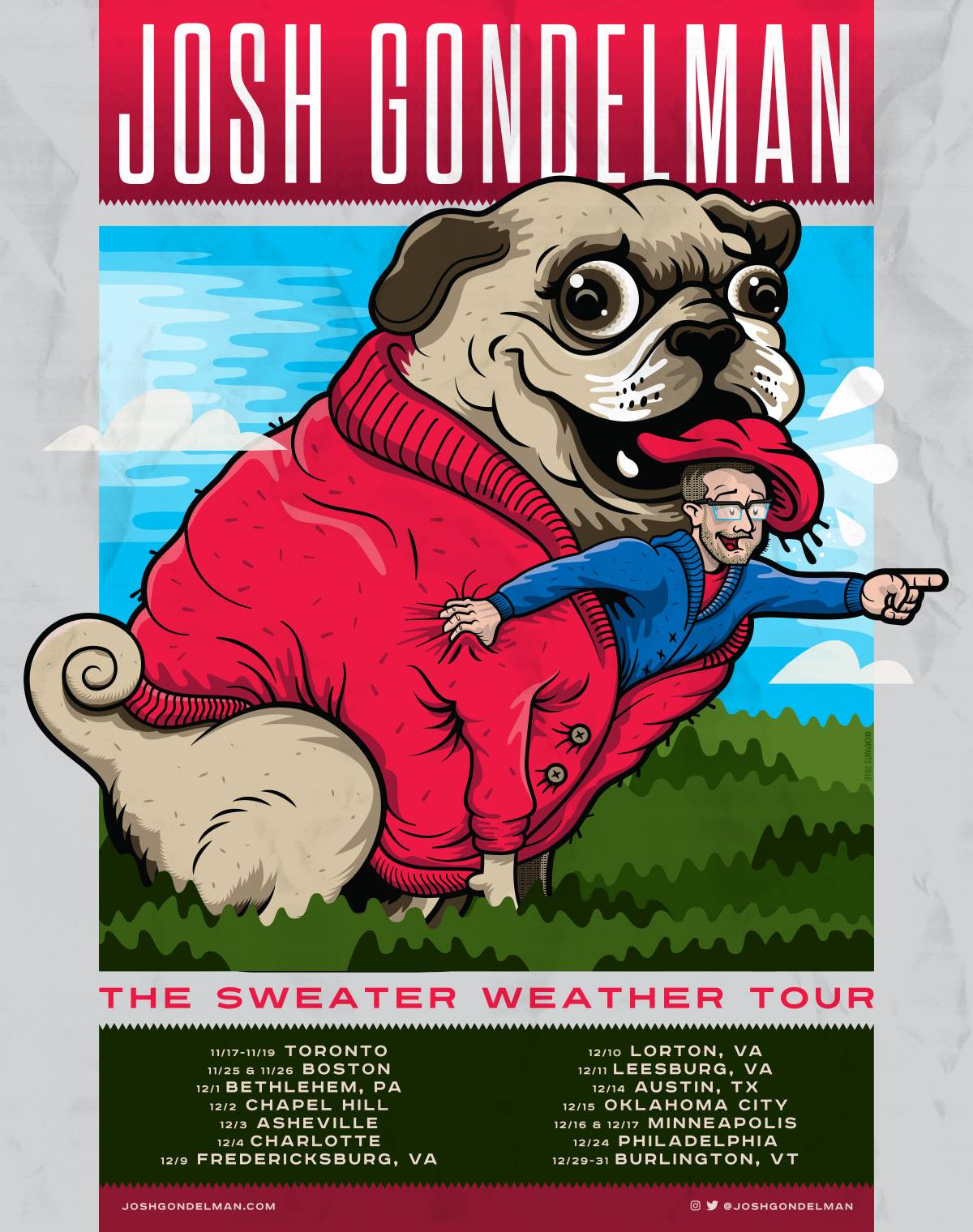 JG: She's pretty great. Her name is Bizzy, she's 9 years old, she's a senior pug – that's what they call her. We adopted her when she was eight and her family, she lived with elderly people, one went into assisted living and one passed away, so she needed a home. We got her through an acquaintance of an acquaintance. We're just obsessed with her, she's so sweet and I think people associate my, I guess the word people use is "brand," with Bizzy specifically and pugs in general, and she's just this sweet old maniac. The first week we had her she was very freaked out, she wouldn't sleep anywhere but our bed, but if we put her in bed she would pee, she wouldn't sleep. If there was any movement she would wake up and just lose her mind, she couldn't handle any noise in our building. And then week two, I was like, "Oh she's perfect. I love her."

DTH: Is she still that way?

JG: No, she chilled way out. There's like a couple noises that will get a rise out of her, she hates our doorbell, and there are these two greyhounds next door that we call the frenemies, because she loves to see them, but she starts barking when she hears them, and not like, "Let's go play" — she doesn't play. But she's super chill, she sleeps all night.

DTH: You are a notoriously nice person, can you tell me more about that?

JG: Part of it is, I have fortunate brain chemistry and I have a great family. I've always gotten good feedback from being nice. It's always been how I interact with people and what I've been rewarded for. I'm really bad at being mean. I really admire rule breaking, and I can't do it. I'm just such a dork. I was on my flight today, and there was a guy who, through takeoff and landing, from the time he sat down on the plane to the time he stood up, he had his seat reclined onto my knees, and I was deeply, physically uncomfortable, but I was also like, "I respect this guy, that's a power move."

Find more of Josh's work on his Twitter and website. His new album, "Physical Whisper" is on sale now.